The investigator will now proceed to open the thoracic cavity starting from the last rib by cutting the costal cartilages at their point of union with the bone. Continue cutting, proceeding up both sides, until reaching the articulation of the sternum with the ribs (Fig. 17); the inferior part of the sternum is raised with the clamp and, then, its insertions with the front margins of the diaphragm are cut. Keeping the sternal plate raised, the insertions of its inner face with the parietal pleura and the pericardium are finally separated. 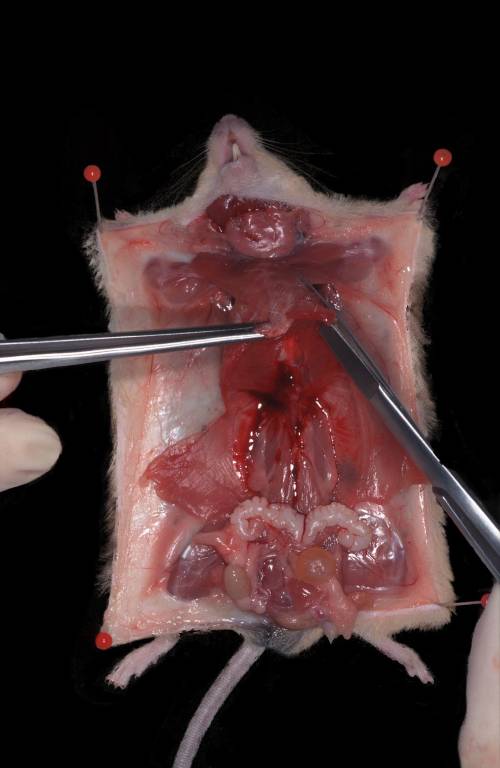 Fig. 17 Opening of the thoracic cavity (Click on the image for a larger version)

Once the thoracic cavity is opened, the investigator will be able to pass to the removal of the viscera.

Also in this case, as it was indicated for the abdominal cavity, it is necessary to pay attention to some characteristics that can be modified as a consequence of the extraction techniques. In this respect, the investigator must consider the position of the organs (situs inversus, congenital anomalies), the presence of adhesions (as a result of pleuritis or pericarditis) or hydro- and haemothorax.

Anatomical outline. The thymus in the mouse consists of two lobes, and lies on the median line of the vertebral column, close to the base of the heart.

The right lobe is longer than the left, and has an oval shape flattened in its antero-posterior diameter. The left lobe is wider and shorter and has a triangular shape. A smooth thin capsule covers the two lobes. The lobes have a parenchymatous consistency and white colour. In normal conditions, the thymus of an adult male mouse of three months of age has an average weight of 30 mg.

Removal and examination. The thymus is the first organ of the thoracic cavity to be extracted. One of the two lobes in its inferior part is raised with a clamp and the ligaments between its inferior face and the pericardium are unglued with the scissors.

In normal conditions, the organ shows variations of dimensions in relation to the age of the animal. In fact, in the young mouse (Fig. 18), the thymus is well developed, while in the adult or in the old age is atrophic and difficult to detect macroscopically.

Size variations of thymus are found in some diseases, with particular regard to localized lymphatic lymphoma (thymic lymphoma). In these cases, the thymus is enormously enlarged, increased in hardness, of whitish colour; sometimes, it occupies a great part of thoracic cavity. In this case, the cause of the death is the compression that the thymic mass exercises on the respiratory movements.

Sometimes, the investigator will also observe the presence of clear liquid in the thoracic cavity, and the enlargement of the lymph nodes of the thoracic chain.

Anatomical outline. The lungs are two large organs of the thoracic cavity and are composed of lobes. The right lung of the mouse, like that of all other small rodents, is larger than the left one. This is due to the fact that the heart occupies, with its diameter, the greater part of the left thoracic cavity. While the right lung is composed of four lobes (the superior, the mean, the post-caval, and the middle), the left lung shows a single lobe.

In normal conditions, the colour of the lung depends on the amount of air and blood present, usually it is pale rose-coloured. The lungs are elastic and have a spongy consistency.

A thin and transparent serosa membrane, called visceral pleura, covers the lungs. At the level of the median wall, in proximity of the hilum of the lung, the pleura is reflected and covers the inner wall of the thoracic cavity and then becomes the parietal pleura. A thin space is present between these two membranes (pleural cavity).

The heart has a pyramidal triangular shape, with its greater axis oriented obliquely to the left. It is divided, by the septum, in one left and one right half with no communication between them. An atrium and a ventricle form each half of the heart. The blood from the atrium goes into the ipsilateral ventricle and then into the circulation, either pulmonary on the right hand side or systemic on the left. The atrioventricular canals are supplied with a valve that allows the blood to flow from the atrium to the ventricle, but not vice versa. The tricuspid valve lies between the right atrium and the ventricle; the bicuspid valve is found between the left atrium and the ventricle. Through the vena cava, the non-oxygenated blood arrives in the right atrium and then passes in the ipsilateral ventricle. Through the pulmonary artery, the blood reaches the lungs where it is oxygenated, and it returns to the left atrium, through the pulmonary veins; then it goes into the ipsilateral ventricle and finally it is distributed to all regions of the body through the aorta.

In the mouse, the length of the apical-basal diameter of the heart is of approximately 9 millimetres, while its transverse diameter, at the level of the ventricles, is approximately 5-6 millimetres.

A serosal membrane called the pericardium covers the heart; the heart is of reddish colour and weighs around 130mg.

Removal of lungs and heart. The removal of all the thoracic organs (heart, lungs, trachea, and main vessels) must be simultaneous. First, the oesophagus and main vessels (vena cava and thoracic aorta) will be cut with scissors at the level of the diaphragm (Fig. 19).

Thereafter, pulling anteriorly, the attachment of the aorta to the vertebral column is removed and then, proceeding anteriorly towards the neck, the attachments of the trachea and the oesophagus. Making another cross-sectional cut in the proximal part of the neck, possibly over the larynges and the thyroid, the investigator can complete the extraction. This simple technique allows the isolation of all the thoracic organs without causing any lesion or changes in their mutual relationships.

Alternatively, the investigator may proceed to the separation of the heart from the lungs, leaving trachea, bronchi and thyroid in situ. 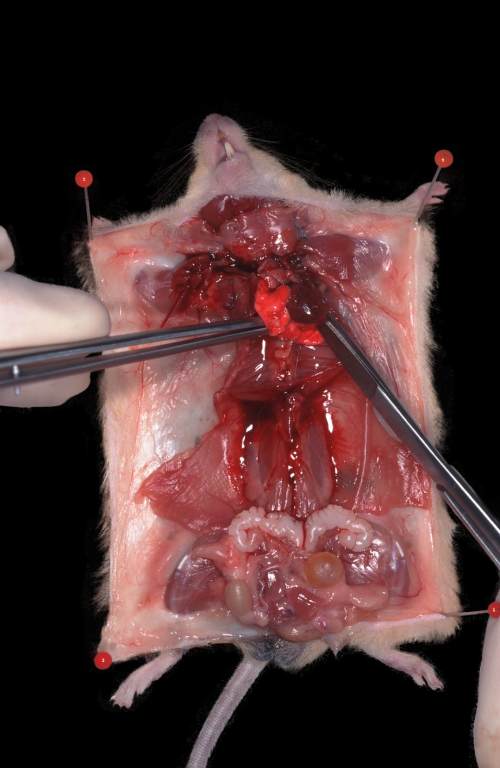 Partial reduction of lung volume may be observed in atelectasis due to a compression of adjacent pulmonary masses or of other masses close to the mediastinum, or by obstruction of the bronchi. In these cases, the organ is diminished in volume and more compact and of dark-red colour.

Some diseases, like oedema, emphysema, infections bronchopneumonia, or neoplasia may, on the contrary, determine an enlargement of the organs.

The oedematous lung appears translucent, enlarged, and of pale colour, due to abundant liquid. At a longitudinal cut, performed along the greater axis of each lobe, these characters may be better appreciated; when you press the organ surface, you might appreciate the loss of discrete amount of a clear liquid. A similar picture is present in the case of emphysema, where the lungs appear equally pale and abnormally expanded. In this case cutting the lobes is accompanied by a thin crackle, caused from the abundant air coming out from the alveolar cavities.

A diffuse or circumscribed enlargement of one lobe may be an indication for a diagnosis of pneumonia. In this case, the lung shows peculiar characters such as an intense dark-reddish colour and hardness similar to that of liver parenchyma (hepatization). Moreover, the cut surfaces appear finely granular and, under pressure, a loss of haemorrhagic fluid is detected.

The presence of some hard whitish nodules easily allows the investigator to make a diagnosis of lung tumours adenoma or metastases).

Removal of the heart. For an accurate examination of the organ, the investigator must isolate the heart from the lungs, delicately cutting the main vessels using scissors.

The external examination of the heart consists of a description of the external characteristics together with possible variations, using the same methodology followed for the other organs already described. However, due to the small size of the heart and consequent handling difficulty, the investigator, in the majority of cases, should limit his task to make a simple external examination of the organ, without opening the inner cavities (atria and ventricles) in order to avoid damage to the endocardium and the valves; these tissues will be better examined histologically.

At the external examination, other heart variations such as colour, volume etc., may be also detected.

Enlargement of the heart will be observed in the case of cardiac hypertrophy, connected with severe blood flow disturbances, lesions of the coronary vessels, hypertension, and in chronic degenerative kidney disease.

A reduction in size is very rarely observed and, when present, is due to a chronic disease of the myocardium or to age.

Different lesions may cause myocardium colour variations: the investigator will observe a pale-rose myocardium in the case of severe anaemia, or dark-coloured in hypertrophy or in acute infectious diseases. The entire aspect of the heart will then be altered by the presence of infarcts, tumours (very rare), and large thrombi, often found in the atrium. In the last case, the investigator will observe a marked expansion of the atrium with irregular sclerotic areas, and sometimes massive haemorrhage in the pericardium and pleura, as a consequence of the rupture of the thin atrium wall.

Anatomical outline. The thyroid consists of two small long lobes with an oval shape adherent to the lateral and dorsal surfaces of the trachea. They are easily visible if the investigator removes the salivary glands reflecting them laterally, together with the relative sternum muscles.

Each lobe is approximately 2-3 millimetres long and 1 millimetre wide. Under normal conditions, the thyroid is translucent due to the presence of colloid, of yellow colour, and has a soft consistency. Aberrant thyroid follicles can be very rarely found in the adipose tissue, near the base of the heart.

Examination. The investigator will then observe the shape and the volume of the gland. Enlargement of the thyroid is usually observed in the presence of circumscribed or diffuse tumourous nodules.

Spontaneous tumours are very rare in the mouse, although their incidence increases if the animal is treated with particular drugs or radioactive 131I. Among non-neoplastic lesions which cause enlargements of the gland, follicular epithelial hyperplasia associated with a diminished colloid content in the follicles must be considered. Sometimes, the presence of an atrophic thyroid, associated with fibrous processes, could be also present in old mice.